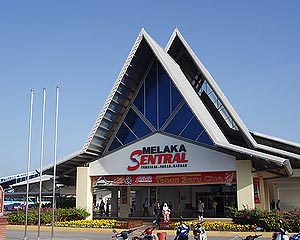 Melaka Sentral is the largest public transportation terminal in Melaka City, Melaka, Malaysia. It is located between Lebuh AMJ(Jalan Tun Abdul Razak) and Jalan Panglima Awang
The construction of this RM 610, 000 bus terminal began in February 2003 was completed in the following year. The bus terminal was opened on 14 May 2004.
The terminal occupies 46.6 hectares of land. It is constructed with high roofs which allows sunlight to reach the inside of the terminal building. The terminal was built based on the design of Kuala Lumpur International Airport (KLIA).


How to get to and away from Melaka Sentral
The bus terminal is about 4km north of the Melaka city centre so you will a taxi or a bus.

Taxi
A taxi costs between RM10 - RM15 (unfortunately, as it is common in Malaysia, Taxi driver refuse to use the meter).

Local Bus No. 17
Melaka Sentral to historic city centre, Mahkota Parade, Melaka Raya, Portugese Settlement
Other than bus #17, you can take any bus this going to Mahkota Parade from the domestic terminal of Melaka Sentral (just beside intercity terminal).

travel time: 4 hours
price: starting at RM40Just next to the bus terminal is Baazar Melaka Sentral (on the satellite map the orange building on the right), a big indoor wet market and shopping complex which is worth a visit while you are there. It is open 24h every day.


When you visiting Malacca by bus to Melaka Sentral, you need to rent a car for travelling around Malacca. Welcome to contact us at World Car Rental Malacca, hp: . We have various type of car rental for your choices, from economic to luxury type of cars such as Perodua Myvi, New Myvi, Saga FLX, Perodua Bezz, Perodua Viva, Perodua Axia, Perodua Kenari, Toyota Vios, Mercedez Benz, Hyundai Starex etc... We provide free delivery of car rental to Malacca Sentral.